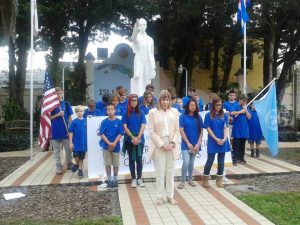 In the five years since the establishment of the Patmos Institute – an organization that barely survives from the depths of Cuba’s resistance movement- is a very privileged group thanks to its friends, both inside and outside of Cuba.

Whithout a doubt, among our very best friends was Mrs Gracia Bennish (October 10, 1943 – August 1st, 2018), President of “United for Human Rights, Florida” who passed away this Wednesday at 7:30am Eastern time. Since 2014 she helped us strengthen our voice inside and outside of Cuba. We were introduced to Gracia by our mutual friend Lincoln Diaz Balart;   thanks to her resolve some of us were able to talk and deliver speeches on Cuba’s right to freedom, from the same stairs that our Cuban leader had so done but a century earlier.  This took place in what once was the tobacco factory at Ybor City, Tampa.  Lead by Gracia, we also were able to speak up at The United Nations where we raised the issue of systematic human rights violations in Cuba.

But more than raising our voice, perhaps this was Gracia’s greatest gesture, it was her descending as Christ did to preach to captive spirits, Gracia went down to Cuba to participate in such an unusual type of tourism:  in solidarity with those seeking democracy and human rights for all Cubans. During her trips, and they were a few, we counted on her as a unique guest speaker, she addressed those in attendance during the 121st anniversary commemoration of Jose Martí’s death, held at the Masonic Lodge “Urania – Dr. Mortera of Zulueta, Villa Clara.  Her participation in this event is to this day, reason for our gratitude.

Moving about Cuba as a badly needed infusion of freedom, Gracia met distinguished leaders of Cuba’s human rights movement, such as Dagoberto Valdés Hernández, among participants of ¨Centro de Estudios Convivencia¨, dealing with the art of coexistence in a fragmented society. This was held at Karina Galvez’s home.  Gracia was also a very distinguished visitor to the farm known as “La Isleña”  in Pinar Del Río, where she was able to see first hand, the dedication of the Pérez Gonzalez Family.  She had a glimpse there of the very best of Cuba’s soul yearning to be free. Grace also visited the headquarters of the UNPACU, Patriotic Union of Cuba, in Havana. Chely was still alive and shared with Gracia, memorable cups of Cuban coffee. It was there she met Jose Daniel Ferrer Garcia, among other leaders of the main opposition group in Cuba.  In Santa Clara, Gracia visited Guillermo “Coco” Fariñas, with whom she spent hours in a back and forth of ideas with the leader of the ¨Foro Antitotalitario Unido¨.

Thousands of copies of the Universal Declaration of Human Rights were distributed along with copies of “The Way to Happiness”, a code of ethics which is ver appropriate for a nation suffering from a deep crisis in values;  these were distributed all over Cuba to thousands of citizens who to this day, avail themselves of the teachings contained therein.  All of this was done thanks to Gracia whom we will never have sufficient words of praise and gratitude.

Good bye dear Friend!  You will walk the path of freedom you paved along our countryside and cities!  Until we meet again!