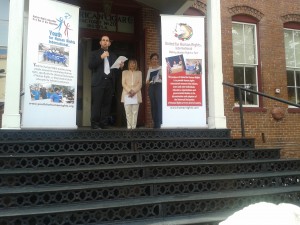 After thirty eight years without been able to take a plane and only watching them flying in the blue sky as far away as the chances, I was thinking, I had to take them. Suddenly that reality changed, and for more than two years now, God´s winds have taken me around the world and this very special place here at Tampa, has been one of the favorite places, where we recall that speaker, who also traveled the world in great extent and who also manifested special predilection for Tampa and for this one place. He was here at least twenty times in a period of three years. It is not in vain the amount of tributes that remember him around this city, identified at least: one statue, two commemorating busts, twelve signs of historical places, one mural, one street, one mutual help center and the Tampa West Cemetery that many call it with his name. Despite all the traveling his heart was anchored to a dream, a dream of democracy, which would free his slaved homeland. José Martí, the Cuban national hero and poet, and his dream of a homeland with the good of all people! José Martí and his dream of a free and democratic Cuba!