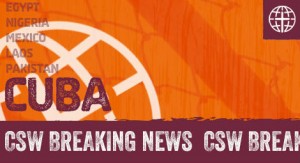 The field hearing in Miami will focus on serious and ongoing violations of human rights in Venezuela and Cuba.

Reverend Lleonart Barroso, pastor of the Ebenezer Baptist Church in Taguayabon, Cuba, will highlight a document outlining specific FoRB concerns in Cuba which he co-authored with his wife, seminary professor and missionary Yoaxis Marcheco, and Apostolic Movement leader and former prisoner of conscience Pastor Omar Gude Perez.  Reverend Lleonart Barroso told Christian Solidarity Worldwide (CSW) that he wants to put the spotlight on the document, entitled “Thirty Questions for the Cuban Government” because “sadly, the questions continue to go unanswered.”

“There are many more questions that could expose the falsehood of the regime’s claims of religious freedom in Cuba. Those who, today, attempt to deceive the world into believing that there is religious freedom in Cuba are the very same people who years ago tried to destroy religion. In our view the fundamental political change necessary to obtain real religious freedom is that those who have gripped power for almost 60 years and who have an ample, scandalous and systematic history of violating religious freedom must give up their power to others who can allow for a democracy and who will respect those rights,” he added.

Jeff Duncan, Chairman of Western Hemisphere Subcommittee of the US House of Representatives, said: “In both Cuba and Venezuela, repressive governments brutally restrict freedom of expression, association, press, and religion. The Castro and Maduro regimes deny basic human rights to those whom they see as a threat to their control. While the world has stood watching, these governments have continued their acts of violence against their people with impunity. Using threats, imprisonment, beatings, and torture, these governments have sought to censure and silence freedom, dissent, and any form of opposition using the sham trappings of democracy, rule of law, and independence. This hearing will provide a rare opportunity to hear from very courageous individuals who have been personally impacted by these governments’ repression. It is my hope that this hearing will provide direction for the United States as we consider our policies towards these countries.”

The Cuban government continues to crack down on religious groups across the country through the implementation of Legal Decree 322, which is being used by regional and local Cuban Communist Party officials to expropriate church properties, many of which are historic. Church leaders from a range of denominations have told CSW that they are receiving notices from local Communist Party officials informing them that the government now owns the property on which their churches are located. The status of the resident religious group is converted to tenants and they are forced to pay exorbitant rent on their own properties and to submit all activities to the Communist Party in advance for approval.

CSW’s Chief Operating Officer Andy Dipper said, “We are deeply grateful to Congressman Jeff Duncan, Chairman of the Western Hemisphere Subcommittee, for convening this hearing and for continuing to put the spotlight on ongoing violations of freedom of religion or belief in Cuba and other Latin American countries. We commend Reverend Lleonart Barroso for his courage in speaking out publicly about how the Cuban government continues to consistently and egregiously violate the religious freedom of Cuban believers, even as he is well aware of the risk of serious consequences for him and his family when he returns to Cuba. We continue to call on the United States and the European Union, as well as on other members of the international community to raise specific violations of religious freedom with the Cuban government, to push for the repeal of Legal Decree 322 and to insist on clear and documented progress on human rights generally in the context of any improvement or normalisation of political and economic relations.”